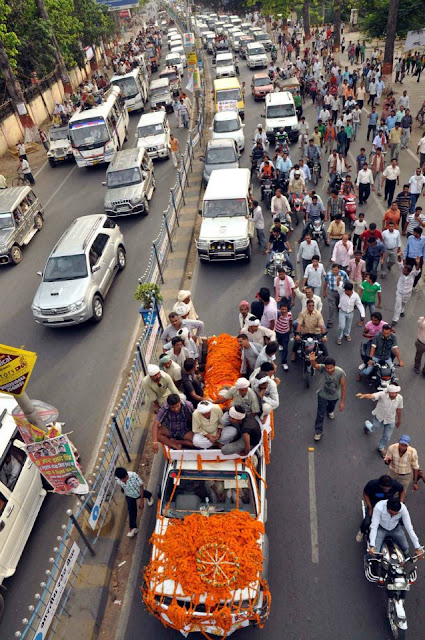 
How a small group of people monopolizes public opinion through discussions concerning armed forces on TV channels exposed by a study conducted by Delhi based media research and training collective, Media Studies Group. The study reveals that only 54 experts and panelists participated in live shows discussing various issues centered on Indian Army including serious allegations of corruption. The study is based on the survey of 24 programs aired on 6 news channels of which 3 each of Hindi and English during 26thMarch to 2nd April.
Findings of the survey (TPS)* reveals that in all discussions held on these 6 news channels 82%  panelists were from two major political parties of India, namely either from Congress or Bhartiya Janata Party (BJP). In all, it was only 54 persons who were invited and participated in 24 programs aired on the subject.  The figures in percentage of these groups are follows: Ex-Army Officers 31 % Political Parties- 31 %, Former-Bureaucrats- 13 %, Journalists- 19 %, and others- 6%. About women participation, it reveals that women participation was only 9 % in form of former bureaucrat and journalists in 15 discussions in English. Only three women politicians participated as discussant as spokespersons of their parties, two from Congress and one from the BJP.

One single Ex Army expert was found taking part in 6 discussions in different news channels which amounts to 25% share of the total programming. Total 4 representatives of the Army participated in 75% of the programs. Similarly, one of the spokespersons of congress occupied 21% of the total number of politician participated in the progams. He was only seen on English channels. Bureaucrats were seen only on English Channels, there were none was seen on Hindi News Channels.

This study has been designed and done by Journalist and Researcher Vijay Pratap on behalf of The Media Studies Group, India. The group founded and led by Senior Journalist, Columnist and former professor of journalism Anil Chamadia who is working in the field of media research and training since last 6 years. It has recently started two monthly media research journal, namely Jan Media (Hindi) and Mass Media (English).

Highlights of Survey
This Survey is conducted from 26 March and 2nd April during the live discussions on TV News Channels on the issue of allegations of corruption on Indian Army. The study is targeted on participation of panelists and experts on those discussions with the objective to analyse the discussions held in news channels.
Study involves 24 programmes in 6 news channels with 3 each in English and Hindi.
9 shows of Hindi news channel were included while 15 programmes of English Channels in the study subject to availability.
Total 54 experts\panelists participated in various programmes across channels out of which 5 were women participants.
17 Former Defense Officials were seen in studios with 31% representation of overall  participation in discussions.

Total 17 panelists were there from political with 31% participation in various programmes.
1)      All panelists were from 5 political parties.
2)      BJP and Congress dominates the representation with 82% among all political parties. Congress had 8 and BJP with 6 leaders participated.
3)      Abhishek Manu Singhvi of Congress was seen in 5 while Tarun Vijay was in 3 studio discussions. All these shows were on English News Channels . Bhupendra Yadav of BJP also participated in 2 Hindi news channels debate.
4)      Out of 17 Political representatives Janata Dal (United) through Sabir Ali was visible in only one TV debate. He was the only representative of any regional party.
5)      D Raja of CPI was also a lone representative from CPI out of 17 participants.
6)      Tariq Anwar of NCP participated in 2 TV debates in Hindi.
7)      Congress was represented by two women spokespersons while BJP was with one. Women spokes persons of Congress were seen in Hindi while BJP’s only women spokesperson went to English News Channels.
Share of former Bureaucrat.
Total of 7 former Bureaucrat participated in programmes with 13% share.
1)       All former bureaucrats were limited to 2 English News Channels.
2)       3 Former Bureaucrats were seen in 2 programmes each.
3)       Bureaucrats were represented by only one by women and that too in a English News Channel.

Participation of representative of political parties